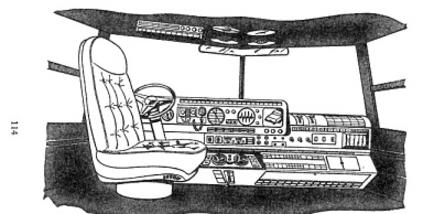 As modified by friendly aerospace engineers, working to Bolan’s concept, the vehicle is a $100,000-plus marvel of space-age technology–providing the warrior with a battle cruiser which is also a mobile base camp, command post, field headquarters, armory, spy ship, home. The spacemen dubbed it a “terran module.”

Wraparound glass windows have been replaced by a system of replaceable panels with strategically positioned one-way-vision portholes. The war room features a foldaway light-table for combat plots, a central command console whose computerized functions may be remoted to the control deck forward (driver’s seat). The aft section contains a weapons lab and armory with concealed storage for munitions and weapons.

Heart of the electronic intelligence-gathering gear involves computerized selection and switching circuits to control radio pickups, sensitive audio and optic scanners functioning within the telemetry systems which feed into the console for synchronizing, time-phasing, sorting, editing, re-recording and micro-storage of collected intelligence data.

Navigations systems utilize a “shared-time” concept with other electronics, allowing complete instrument control in zero-visibility situations. The heavy-punch capability is embodied within a swivel-platform retractable rocket pad concealed below the roof. This system is operated from the command deck, features highly sophisticated fire control gear with night-bright optics as well as laser-supplemented infra-red illuminators, with automatic target acquisitions via video or audio sensors.Upon command, the launch platform rises through roof panels to lock into firing positions. Control may be remoted for “Extra Vehicular Activity” (EVA). Also, targets may be pre-selected for auto-fire via time or video controls. This system delivers massive destruction at impressive range and with pinpoint accuracy, whether the target be stationary or moving. 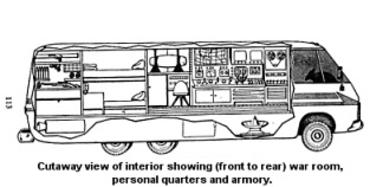 Bolan’s warwagon for the New Orleans operation was something new and special–a uniquely outfitted and beautifully integrated GMC motor home, a sleek low-profile 26-footer designed with the sportsman in mind. Bolan was no sportsman; for this warrior, the fabulous new vehicle represented a comfortably appointed mobile command post, a field headquarters, an armory, and electronics surveillance unit, all in one–it was base camp.

Most of the cost–about $100,000 of easy-come, easy-go Mafia-donated warchest funds–had been spent for special equipment and installation.

The electronics were courtesy of the space program and incorporated the most sophisticated developments of space-age science. A moonlighting NASA engineer provided the labor and materials for the basic radio gear. A technical genius from a local electronics firm did the rest, even to designing, building, and installing the computerlike selection an switching gear; highly sensitive directional audio pickup equipment; concealed or disguised antennae; optic marvels; a console for synchronizing, storing; sorting, editing; time-phasing, and even re-recording collected intelligence. He even had a mobile telephone and a simple radar unit.

The NASA engineer admiringly dubbed the completed project a “terran module” comparing it favorably with the best thing yet developed in lunar modules.

Bolan liked it, though he was a bit awed by the electronic capabilities of his new war wagon. It would have blown Gadgets Schwarz’s electronic mind. What it all meant for Mack Bolan, in gross, was a wider range for his war effort. The gear in that van, of course, was entirely dependent on the military capabilities of the man it supported. He could “scan through” a neighborhood with the audio pickups operating and perhaps learn a thing or two about the enemy. He could probe for vehicles and unusual concealed masses of metal with the radar device. He could cruise within line-of-sight of planted radio bugs and trigger a quick-pulse collection without even stopping the vehicle–then unscramble, time-pulse, and play back the recording without leaving the driver’s seat. But all these capabilities merely widened the scope for the warrior. They did not fight the battles.

Other special installations in the new warwagon provided the direct military support. There was a foldaway light-table for mapping and plotting battle lines, assault and withdrawal routes, and other tactical considerations. He had a fully equipped weapons lab and armory with concealed storage for munitions, explosives, tactical gadgets. In that lab he could build, modify, or repair all types of personal weapons as well as explosive devices.

Large picture windows along the sides were made of one-way glass, thus affording Bolan plenty of visibility, while effectively shielding the interior from curious eyes.

Stock features on the vehicle include a 455-cubic-inch Toronado engine. Slightly modified. Front traction with automatic transmission freed the rear tandem wheels from axles and conventional suspension–there were air bags instead of springs, adjustable from dashboard controls to raise or lower each side separately and compensate for uneven ground conditions. For animal comforts there was a galley, shower and toilet, and bunk space in the rear.

Completely self-contained, she was a warwagon in every sense and a long-needed complement to Bolan’s war effort. Hopefully she would deserve the man through many campaigns, but the sleek module would have been well worth the money if she carried him through just this one.

Bolan was thinking, in fact, that she was worth it for the present task alone. He was parked at the lakeshore within view of the Lanza place–door open, a dummy fishing pole that was actually a mobile radio antenna clipped casually to the front bumper, Bolan himself seated in the comfortably padded high-backed console-type driver’s seat and eyeing a reflecting plate installed at his right knee, part of the long-range optics capability.

One can only wonder what Don Pendleton would have done with a warwagon if he had created it with today’s high technology of the 21st century instead of thirty-one years ago when some of the technology was just evolving. I’m sure that it would have been an awesome war vehicle for Mack Bolan to fight his Mafia war, much the same as Bolan’s “terran module” was for that time period.

I’ve included illustrations of Bolan’s high tech war wagon from the 1977 The Executioner’s War Book, which has become a collector’s item.


Many thanks to Mike Cagle of Indiana for the beautiful art rendering of Mack Bolan. In 1975, Don Pendleton commissioned the then young talented artist, Cagle to do drawings of Mack Bolan for him. The drawing on this page of Mack Bolan is protected under Copyright ownership and may not be copied or used in any way. 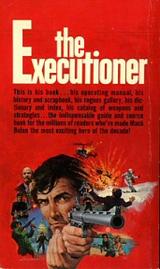 In 1993, Don Pendleton was interviewed by Advance Comics, James Eisele and the interview was published in their July 1993 issue.

Pendleton had this to say about The Punisher: “Let’s just say The Punisher has taken a lot of liberties with my work. Anyone who knows the history of The Executioner has known that all along. I elected many years ago to just let it pass, feeling that there is room for both of us in this industry. Of course, new Executioner readers may get the impression that I have “borrowed” from The Punisher, but let me set the record straight: War Against the Mafia debuted in 1968, and has been a flagship of action/adventure in all mediums throughout these years. Sad to say, my own publisher at Pinnacle began the trend, firing off invitations to various writers with copies of my books and stating that he would be interested in considering similar stories for his publication. The way this business works, practically every other major publisher jumped on the bandwagon. Of course, I have no bitterness or sense of loss from any of that; it is the highest form of complement for a writer to become a standard-bearer, and certainly The Executioner has remained in that special place all these years, and worldwide.”

James Eisele had asked, “They weren’t taking stories that you had written?”

Pendleton continued, “No, not exactly chapter and verse, but The Punisher took alot of what I consider “signature pieces” including Bolan’s War Journal, the War Wagon, and various situations which The Punisher incorporated. I created the high tech War Wagon in 1973, after using a much simpler version in previous books. The new War Wagon was built around a gutted GMC motor home put together by Bolan with the help of engineers who were sympathetic to his cause. It was a fantastic vehicle with high tech weapons on board.”

For those you have not read all of Don’s early Executioner’s, Mack Bolan’s War Journal came into play in the opening of the book of the series in 1968 and was used throughout the books. Don Pendleton introduced the high tech version of the Warwagon in Executioner # 20, New Orleans Knockout (written in 1973, published 1974) and writes about it in detail in The Executioner’s War Book, published in 1977.

This site does not have any affiliation with Pinnacle Books, Kensington Books, Marvel Comics or Harlequin's World Wide Library, Gold Eagle Imprint.
This site is owned by Linda Pendleton. 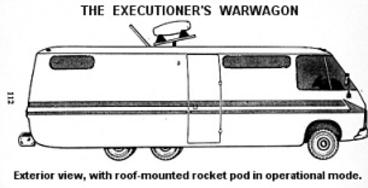 Don Pendleton was often asked about Mack Bolan’s Warwagon by his readers or interviewers, and I have received questions about it, also. Often those questions have been from those who know of The Punisher Comics and the somewhat similar story line that The Punisher took in the late seventies and beyond.

Of course, Don created his Mack Bolan character and his “signature pieces” in his Executioner novels long before The Punisher found his way into Comics in 1974 with the debut of the character in a Spiderman Marvel Comic. In the Marvel Preview # 2, 1975, introducing The Punisher, was also a long and exclusive interview with Don Pendleton by David Anthony Kraft, titled, “The Executioner Speaks Out!” This interview was about Don’s writing career and life as a writer. It had nothing to do with The Punisher and there was no mention of the new comic character in the interview. 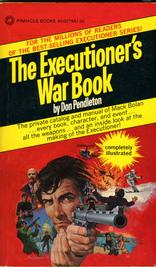 Don Pendleton introduced the later version of his Warwagon, Mack Bolan’s high tech version, in The Executioner # 20, New Orleans Knockout, published 1974. Here is an excerpt from the novel: 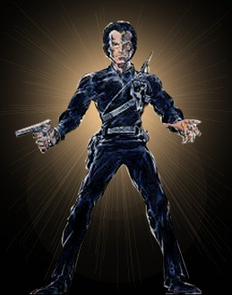