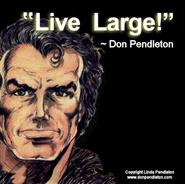 It was 1968, a time in America of civil unrest, love and flower power, psychedelic streets of Haight-Ashbury and Berkeley, the horrors of the Vietnam War, and the iniquities of the Mafia, when Mack Bolan, the Executioner was conceived in the mind of Don Pendleton.

At the height of the Executioner success, many publishers and writers attempted to ride on the coattails of Don's success. Some succeeded. Others did not. In many of those books, what appeared to be missing were the elements that Don had so skillfully crafted with his presentation of his fictional hero.

Within his Bolan stories are strong values, with an underlying theme of a higher morality that Bolan follows. More than once Don said about the Executioner novels, "My biggest job throughout writing the series was to keep faith with Bolan–that what he is doing is right. I wanted an enemy beyond redemption–an enemy that all civilized procedures had failed to put down. The Mafia was ready-made. They embodied all the evils of mankind."

Don wrote the first novel in the series, War Against the Mafia out of his desire to express his discomfort with the reaction of many Americans to our soldiers who were dying for our country in the jungles of Vietnam and those coming home to outrageous verbal and physical abuse. So Mack Bolan became Don's symbolic statement. He also became every soldier's voice. Don created a heroic character in Bolan, a true hero who was dedicated to justice. The enemy that Bolan had to fight was no longer on the battlefields of Vietnam but right here on American soil, and that enemy was the Mafia.

So what is it about Don's fictional hero that has captured the minds of readers with diverse international social and cultural backgrounds and kept readers wanting more all these many years? Is it that yearning for a heroic figure? Is it the essence of a fictional character that brings him to life, moving off the page into the heart of the reader? If those things endear us to fictional heroes, how does the author achieve that? An unforgettable character is created by an author who writes with passion, with credibility and rational thought about the human situation. Mack Bolan does not portray the human situation in stark shades of black and white, and his quest is every man and woman's quest.

Don elaborated on the metaphysical elements and the essence of his Executioner hero when he said, "Bolan lives large, responding to the challenge of life, remaining alive and remaining human in the process. Success in living means growth, achievement, beating the challenge and maturing toward a meaningful evolutional plateau. Bolan's killing, and the motives and methods involved, is actually a consecration of the life principle. He is proclaiming, in effect, that life is meaningful, that the world is important, that it does matter what happens here, that universal goals are being shaped on this cosmic cinder called earth. That's a heroic idea. Bolan is championing the idea. That is what a hero is. He cares and reacts to a destructive principle inherent in the human situation. Destructive violence defeats the evolutionary movement if unchecked; constructive or positive violence is the check, usually, and operates to advance the cause of evolutionary life. I would hope that my books remind people that commitment is what life is about. I hope that their own sense of personal dignity and respect for life is enhanced through that identification with Bolan. My moral obligation to the reader is, foremost, to entertain him or her. Secondarily, it is to add some worthwhile content to their understanding of who and what they are or may be. I do not believe that my books constitute a call to violence. Quite the reverse. The whole thing is an allegory, and anybody who would want to trade places with Mack Bolan is missing the entire point of the Executioner rationale. This guy is living in hell."

Don also believed that the male attraction to Bolan had to do with the innate warrior essence that has basically been lost over the centuries. Men identify with Bolan's warrior essence, even at a subliminal level, and in doing so, re-identify the male essence within self.

Approximately forty percent of Executioner fans over the years have been women. From a woman's perspective, Bolan is the romantic hero, a man of strength and a protector–a knight in shining armor. So in a society that seems to fail to give us true heroes, Bolan fills the bill.

When you read Don Pendleton you feel his multilayer reach for his reader's mind. That was his goal, his hope, that when a reader finished the last page and closed one of his books not only would the reader feel entertained, but would be left with something to think about, some new idea to ponder. A meeting of the minds: a meeting of his, the author, with each and every one of his millions of readers around the world.

Don franchised his Executioner characters to Harlequin's Gold Eagle Imprint in 1980 after writing Executioner thirty-eight, Satan's Sabbath. Gold Eagle's program has resulted in nearly 900 Mack Bolan books published since that time with several spin-off series: Able Team, Phoenix Force, Stonyman, and Super Bolan. Don was a Consulting Editor with the Harlequin program until his death but did not write any of the Harlequin books, which have all been written by a team of writers.

In December of 2014, Open Road Media published thirty-seven of the original books as ebooks, and the books are available at Kindle, Nook, Kobo, Apple, Indiebound, and Google.  In October 2016, the first three books of The Executioner Series were put back in Print.  Tantor Audio published the first five Executioners as audio books, recently. 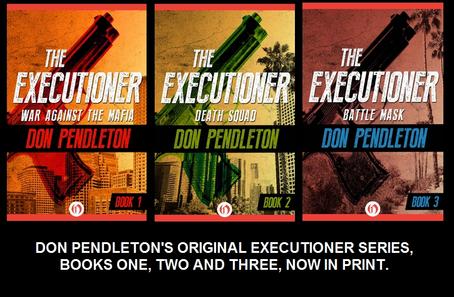 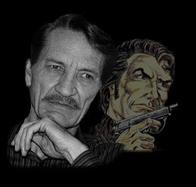 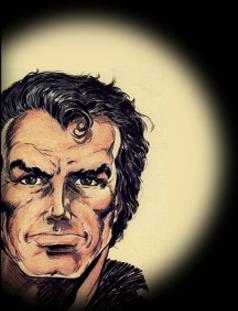 This article is under Copyright 2002 by Linda Pendleton and may not be used in any way or form, including posting to web sites.
Many thanks to Mike Cagle of Indiana for the beautiful art renderings of Mack Bolan. In 1975, Don Pendleton commissioned the then young talented artist, Cagle, to do drawings of Mack Bolan for him. The drawings on this page of Mack Bolan is protected under Copyright ownership and may not be copied or used in any way.