By 1975, Don had published eighteen Executioner novels. The Executioner series was hot and had been translated into a large number of foreign language editions all over the world.

Now and then over the years, Don had been approached by Comic publishers to put Mack Bolan in Comic but it was not until a contact with David Campiti, publisher and editor in chief, at Innovation Comics in 1992 that Don seriously considered the comic format for Bolan. Campiti offered a good deal and, most importantly, full creative control.

When asked about the prior interest of comic publishers in an interview of Don and Linda Pendleton by David Campiti and Karen May in 1993, and published in Comics Buyer’s Guide, July 16, 1993, Don had this to say:

“Yes, there has been interest, but I never felt that I would have any meaningful input into the process–and I just did not feel comfortable with giving a carte-blanche access to the other outfits I knew about. Not that any in particular are doing lousy work, but it is a very dynamic industry, and I had neither the time nor the inclination to get involved.”

“I agreed to take on the writing chores with Linda at my side, because David was having a problem finding writers I trusted, and I did not want to see the thing fall into the hopper. I had confidence in David and I knew that Linda had the vision. I sit in the background and kibitz, but her hands alone are riding the word processor.”

When asked by Karen May how comic writing differed from novel writing, Don answered:

“About as different as night and day. Neither of us had the slightest idea of the demands of this project, and we had to learn it. A typical movie script is more of an outline of the action, with dialogue elements which may or may not be followed during actual shooting–and the set is jammed with highly talented people who handle all the fine details of costuming, direction, sets, sound tracks, all that stuff. A movie set is equal in almost every way to the preparation of a Moon shot at Canaveral. This is a huge collection of experts who are herding the thing along.

“We don’t have that level of direct input with a comic book. The writer has to “call” every shot, set up every panel in an artful manner. The writer is the director, the prop man, the special-effects guy, the costumer and scenic designer, the whole schmear. We don’t even have a script girl or lighting technician! We have to present in words the total effect desired of the artists, and, if we cannot impart our vision to them, then they are like a canoe without a paddle.

“The artists are vital to the ultimate result, of course, but we have to call the shots for them and hope that we are connecting with truly creative genius at the other end. We are very fortunate to have the gifted artistic talents of Sandu Florea as well as the rest of the team, and we hope to have them with us all the way on this project. Sandu is a jewel and delight to work with.”

Linda Pendleton had this to say in answer to Karen Mays’ question:

“Adapting The Executioner to comics has been a lot of fun and a real challenge. Don and I weren’t married when Mack Bolan was “born,” but I love the character. Bolan has such depth and, when you see the world through his eyes, the acts of violence are necessary and right action.

“So many ‘clones’ of The Executioner in all media seem to miss the important story elements and credibility that are an integral part of all of Don’s writing. So many other action/adventure works employ violence itself as the most integral story element–no real sense of humanity or even basic morality. I believe the readers of The Executioner recognize the underlying themes of these stories–the essential humanity of the character–and that is what kept readers coming back for more all these years.”

I now,  years later, look back at our scripting of War Against the Mafia with such fond memories. It was another adventure for Don and I, a time of laughter along with the hard work of adapting War Against the Mafia. As Don stated in the interview, it was delightful working with such an experienced comic book artist as Sandu Florea. Neither Don or I were experienced in comics. Oh, we had both read some comics over the years, Archie and Superman, for instance, but that was really the limit of our “expertise!” We quickly picked up the scripting format from David Campiti, and then rolled with the flow of Bolan. Of course, Don’s writing is very visual, fast-moving, sometimes like a fast moving rocket, and it does take some work to cut a 200 page action filled novel down to a four part comic. I chuckle when I think about the drawings of my stick figures that I would send to Sandu along with our script. Sometimes I had a vision for the panels and Sandu always came through incorporating my vision onto the comic page with his great penciling.

Sandu Florea was also able to capture Mack Bolan perfectly in his artistic renderings, much the same way that artist Gil Cohen had always done for the covers of The Executioner novels.

War Against the Mafia Cover art by Joe Pimentel. 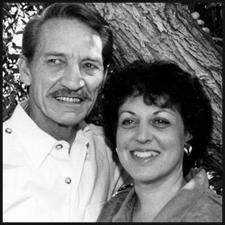 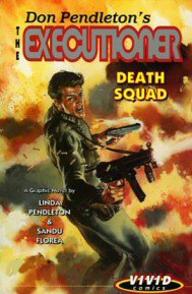 War Against the Mafia and Death Squad

From Mack Bolan, The Executioner,
War Against the Mafia, Part One 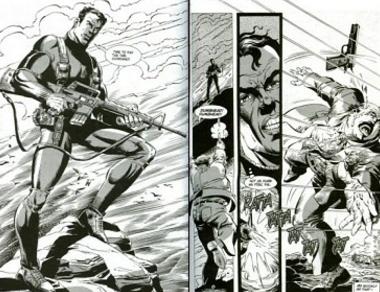 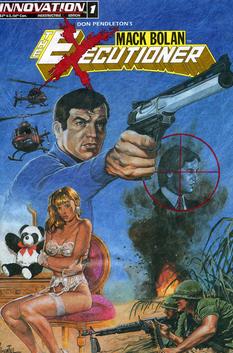 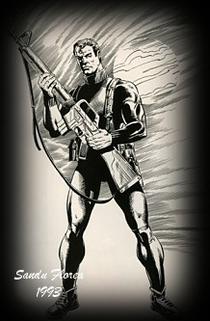 We also had a lot of fun attending the San Diego ComicCon in August 1993. Don and I, and Sandu Florea, autographed the Part One of The Executioner, War Against the Mafia and met fans at the Innovation Booth. We had the opportunity to spend some quality time not only with Sandu Florea, but also with David Campiti and his associates.

The only sad and disappointing thing about the War Against the Mafia Comic is that Part Four, which we had all completed, was never published as Innovation Comics went bankrupt. That was such a shame. For those who have read all three parts, they can read the novel for the conclusion of the story.

Don Pendleton was given the 1992 Diamond Comic Distributors Gem Awards for Lifetime Achievement.

After Don’s death, I decided to publish the second Executioner novel, Death Squad. I worked again with Sandu Florea, and Don Pendleton’s The Executioner Death Squad, a 128 page graphic novel done in black and white, was published by Vivid Comics in 1996. 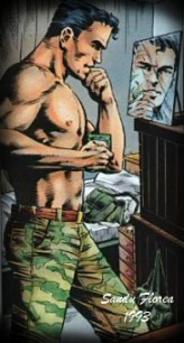 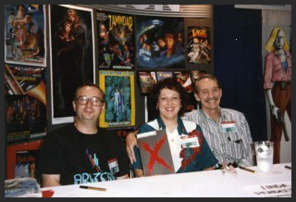