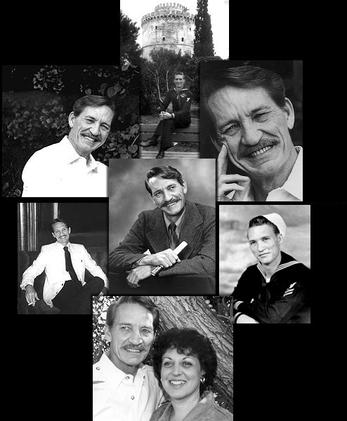 Don Pendleton was born in Little Rock, Arkansas, December 12, 1927, son of Louis Thomas Pendleton and Drucy Valentine, and was a direct descendant of Philip and Isabella (Hurt) Pendleton, who came from Norwich, England to settle in Virginia in 1674.

During World War II, on December 7, 1942, days before his fifteenth birthday, Don enlisted in the U.S. Navy, serving as a Radioman First Class until November of 1947. He served in all the war theaters, receiving various medals including the Naval Commendation Medal, Iwo Jima 1945, and helped set up the postwar air traffic control networks in the Pacific, (in a joint civil/military project). He received his GED certificate of high school equivalency while in the Navy in 1947. In 1952, in the midst of the Korean conflict, Don returned to active Naval service for two years.

His skill as a radioman during World War II led him to the railroad after the war where he was employed as a telegrapher for Southern Pacific Railroad until 1957. For the next four years, he worked for the CAA/FAA as an air traffic control specialist. In 1961, his career turned toward aerospace engineering where he served in management positions during Martin-Marietta's Titan ICBM programs, as an engineering administrator in NASA's Apollo Moonshot program, and with the United States Air Force C-5 Galaxy program.

He began writing in 1957 and his first short story was published that year, followed by a first novel in 1961. But it was not until 1967, at the age of forty, that his attention turned to full-time writing.

After producing a number of short stories, science fiction and mystery novels, he launched, in 1969, the phenomenal Executioner Series of novels, which quickly emerged as the original, definitive Action/Adventure series. The first Executioner novel, War Against the Mafia, was followed by an additional thirty-seven sequels during the ensuing twelve years. The Executioner: Mack Bolan series has been published around the world in more than twenty-five languages with close to two hundred million copies in print.

Dozens of imitators, inspired by Pendleton's success, arose during the early 1970's to constitute a new literary genre. The term action/adventure, coined by Don Pendleton, soon spread to encompass television and motion picture formats as well.

In 1980, Don franchised his Executioner characters to Harlequin's Worldwide Library of Toronto, Gold Eagle Imprint. Until his death, Don served as Consulting Editor on the Gold Eagle Program, although was not directly responsible for any of the Mack Bolan novels written since 1981. Their team of writers have produced close to nine hundred novels based on Don's original works, including several spin-off series: Able Team, Phoenix Force, Stonyman, and Super Bolan.

In addition to being a novelist, Don was a poet, a screenwriter, essayist and metaphysical scholar. In 1990, he turned to nonfiction with the publication of To Dance With Angels, written with his wife, Linda Pendleton. The book, a definite study of life after death, is currently in its fifth edition, with a new Introduction by Linda Pendleton.

His last novel, a crime/suspense story written in collaboration with Linda Pendleton, One Dark and Stormy Night...' has been published as an ebook and was an EPPIE 2001 Award Finalist. The book, now titled, Roulette: The Search for the Sunrise Killer, is now in print, ebook and audiobook.

Don Pendleton is acknowledged as the "father of the modern Action/Adventure novel." His Mack Bolan, The Executioner, theme is "Live Large" and the Random House Historical Dictionary of American Slang, Volume II (H-O) gives derivation credit for "live large" to Don Pendleton and his Executioner Series.

Don's more recent works, following the Executioner Series, include the Joe Copp, Private Eye series of six books and the six Ashton Ford, Psychic Detective mystery novels.  All twelve books are again in print, ebooks. and audiobooks.  In December of 2014, thirty-seven books of the original The Executioner, Mack Bolan Series were published as ebooks, and the first three books in the series are also in print.

His works were often flavored with a metaphysical theme and Don considered the Executioner series to be a study in the metaphysics of violence. His Mack Bolan character embodies the essence of a true literary hero, thus, the apparent reason for the world-wide popularity with readers for more than forty  years and, in some cases, several generations of readers.

Don Pendleton was a member of the Authors Guild, Inc.; The Authors League; The Writers Guild of America, West; a past West Coast Director of the Mystery Writers of America; NAPRA; International Platform Association; and a frequent speaker on school and college campuses and at writers' symposiums.

Several of his earlier books were written under the pseudonyms, Dan Britain and Stephan Gregory. He published more than one hundred twenty-five books in his long career and the majority of those books enjoyed foreign language publication.

Don and Linda married in 1985. He is the father of four sons and two daughters by a prior marriage. He has numerous grandchildren and great-grandchildren.  Don Pendleton died October 23, 1995 at the age of sixty-seven.